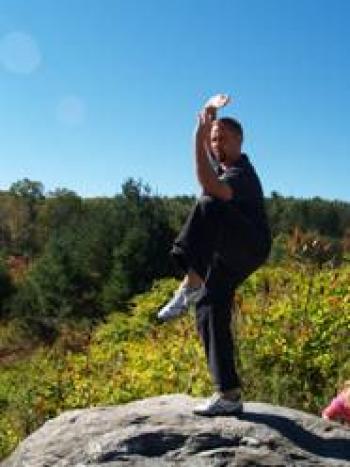 Sifu Matt Carey has nearly 25 years of experience in the martial arts. Since the age of 13, he has spent much of his life devoted to the development of Mind, Body, and Spirit.

Achieving his black belt in Quan-Fa (Shaolin Kempo) in 1992, Sifu Matt continued his training and took on multiple disciplines. Beginning in 1996 he was introduced to a very old and rare form of Tai-Chi. Yang Family Style Tai-Chi (Long Form) is one of the oldest forms of Tai-Chi, developed in the early 1800’s by Yang Lu-Ch’an. Stemming from its grandfather art, Emperor’s Long Fist (Circa 960-976 A.D), Yang Tai-Chi encompasses Qigong, 108 Movement Form, Body Alignment and Rejuvenation, and Push Hands (The Martial application of the art).

Western medicine and theory is just now realizing the health benefits of Tai-Chi. Most westerners tend to die from the ground up. Once the root is lost, deterioration sets in. Through daily Tai-Chi practice one can reverse the aging process by strengthening the core, increase bone density, messaging the internal organs, and opening the blood and heat channels throughout the body to the hands and feet.

When not training or teaching, Matt spends his days as a Corporate Account Manager for PC Connection. Also a father of a three and a five year old, there is little time for anything else.